Sprint Booster for Off-Roading and 4-Wheeling

Off Road & 4-Wheeling with a Sprint Booster V3 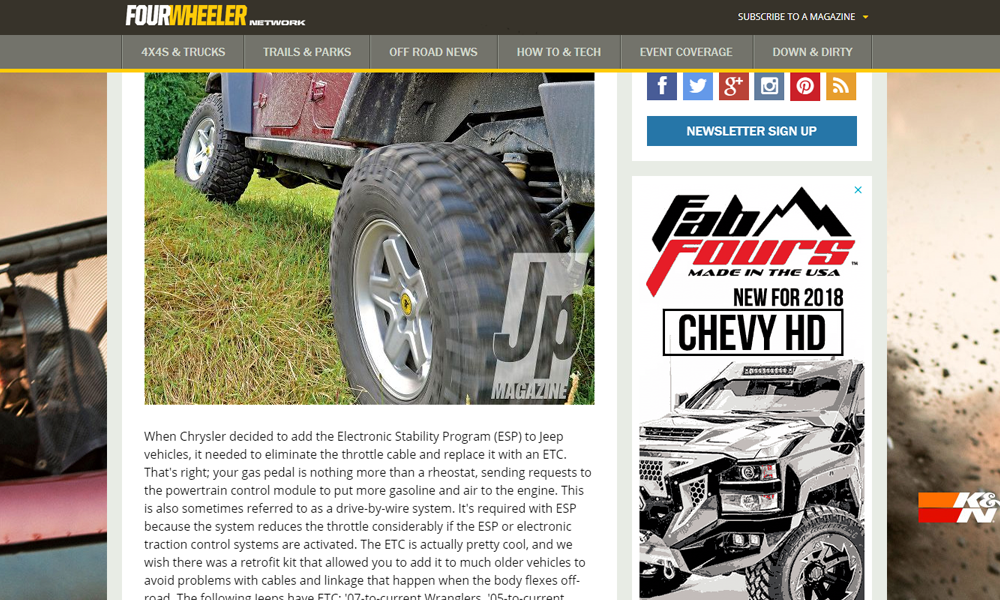 When we first heard about the Sprint Booster, we wrote it off as electronic snake oil. We found it hard to believe that a plug-in module that eliminated the delay in a vehicle with Electronic Throttle Control (ETC) could make a difference you could feel. We were wrong - big time!

When Chrysler decided to add the Electronic Stability Program (ESP) to Jeep vehicles, it needed to eliminate the throttle cable and replace it with an ETC. That's right; your gas pedal is nothing more than a rheostat, sending requests to the powertrain control module to put more gasoline and air to the engine.

This is also sometimes referred to as a drive-by-wire system. It's required with ESP because the system reduces the throttle considerably if the ESP or electronic traction control systems are activated. The ETC is actually pretty cool, and we wish there was a retrofit kit that allowed you to add it to much older vehicles to avoid problems with cables and linkage that happen when the body flexes off-road.

The following Jeeps have ETC:

Compass and Patriot also use ETC, but we're guessing no one who reads this magazine owns one of those.

The Sprint Booster is available for many different Jeeps and lots of other vehicles as well. It is a small module that plugs in between the ETC and the wiring harness. It reduces the response time between you moving the gas pedal and the powertrain giving you what you're asking for. We didn't think there was that much delay in our throttle to start with, but we gave the product a shot.

We installed a Sprint Booster in an '08 Jeep Wrangler with 35-inch tall tires, 4.10 gears, and an automatic transmission. What we found was an instant improvement in throttle response. We were spinning the tires now without meaning to! And the transmission would downshift much sooner when we leaned into the throttle, adding to the overall improved responsiveness.

The Sprint Booster actually made the Jeep more fun to drive on pavement.

The Sprint Booster is a small plug-in module that installs between the gas pedal assembly and the wiring harness. It eliminates the delay in throttle response in vehicles with Electronic Throttle Control (ETC), giving you much better throttle response and better performance.

Which led us to two suspicions.

One was that gas mileage would decrease. It stands to reason that performance is better, so we must be using more gas, right? After a couple of tanks of fuel, we can report no decrease in fuel economy. A pleasant surprise.

Second, we thought that the throttle might be too responsive in 4-lo off-road. Another pleasant surprise. The throttle reacted just fine in 4-lo, leaving plenty of control for carefully driving off-road, even with our 4:1 transfer case. In fact, the improved reaction time of the throttle gave us more control because we could use less throttle movement to get the power we wanted.

Installing the Sprint Booster doesn't take much time, but it's a bit of a pain on a Wrangler. There are two 10-millimeter nuts that hold the ETC module (throttle pedal) to the firewall. We used a deep socket and a short extension on a ratchet to remove both. You'll need to pull the wiring harness out of the way to access the upper nut. Unbolting the pedal assembly allows you drop it down a few inches to unclip the wiring harness connected to the very top.

Even though the Sprint Booster technically doesn't add any power, we'd put it in the same league as a cold-air intake or an engine programmer for the fun-to-drive factor that is delivered by improving the throttle response.